Marshall County is located in the north central part of Illinois (covering an area approximately 35 miles east and west and ten miles north and south), having a total area of 393 square miles and a 2010 population of 12,640. The Illinois River intersects the County northerly and southerly, separating the County in approximately a western one-third and an eastern two-thirds. The topography is typical Midwestern flat prairie land, except the scenic Illinois River Valley with its attending creek basin tributaries with the river valley varying in widths from one to approximately 2 miles. Marshall County is located approximately 120 miles southwest of the City of Chicago thirty miles northeast of Peoria ninety miles southeast of the Moline-Davenport-Rock Island community and 30 miles southwest of the LaSalle-Ottawa-Streator complex.

From the Illinois Bar Journal:

“The County’s first courthouse was built at Lacon in the center of the County. Constructed in 1840, it was a brick, two story building measuring 55 by 40 feet. Its cost was $8,000. Supreme Court Justice Thomas Ford presided at the first circuit court session on April 23, 1839 in the Lacon Methodist Church.

An early morning fire from a defective flue destroyed the first courthouse on January 5, 1853, but, fortunately, most of the movable fixtures and records were saved. 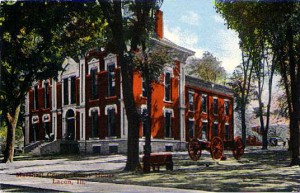 the same site of the first courthouse and probably was a duplicate since records indicate that both the first and second courthouses at Marshall were built from the same plans as the Metamora Courthouse (now a state museum). As a result of the removal of four columns from the front of the couthouse in 1880’s and subsequent construction of additions, it no longer resembles the Metamora Courthouse.

Lincoln visited the County on at least four occasions. The three volume work, ‘Lincoln Day By Day,’ states that Lincoln appeared in Lacon on July 18, 1846 and made a speech in behalf of tariff and two days later crossed the Illinois River, which bisects the County, to speak in two precincts of Marshall County. The Illinois Gazette of Lacon reports that on November 1, 1848 the ‘Hon. A. Lincoln addressed a numerous assemblage of our citizens from all parts of the county’ urging them to vote for General Zachary Taylor for President.

Both Lincoln and Douglas were reported to have visited Lacon on October 17, 1854 and were billed to make speeches, but for some reason neither spoke. On September 29, 1856, Lincoln boarded the 11 a.m. train in Peoria to travel to Lacon. The following day, Lincoln and Owen Lovejoy, brother of the martyred Elijah Lovejoy, addressed a meeting of 2,000 Marshall County Republicans and a delegation of Henry citizens who made the trip across the prairie in 64 wagons led by a brass band.

The County apparently was a hotbed of anti-slavery activity. An underground railroad for runaway slaves was maintined in Lawn Ridge and on one occassion Nathaniel Smith helped a group of seven fugitives escape. The first runaway was brought to the area by a Dr. Cutler hiding under a featherbed in a wagon. 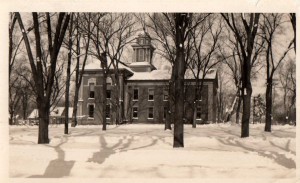 A number of prominent lawyers have practiced in the County and one of the first was Ira I. Fenn who helped train others for the law, including Silas Ramsey and Mark Bangs, the latter of whom was one of 88 lawyers and judges who met in 1877 to found the Illinois State Bar Association.

G.L. Fort, a Lieutenant Colonel during the Civil War and a Congressman from 1873 to 1881 is listed as one of the msot prominent of all lawyers to have lived in Lacon. Old histories indicate that he once was considered a prospective candidate for Governor. He came to the County at the age of 9 in 1834 and died in 1883 at the age of 58.